Metal fences are a great way to separate off your yard from passers-by and from intruders as well as keeping any pets enclosed.  But, how did the first metal fences originate? 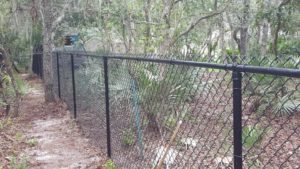 Back in Colonial America, it was only the richest people who could afford the wrought ironwork that was desired for their stone and brick homes. However, once the 1800s started, blacksmithing grew within the country and then ornamental ironwork began to adorn many housing styles of the period. It became extremely popular during Victorian times as foundries began mass-production of different types of posts and pickets.

Nowadays, metal fencing is usually suggestive of iron rather than being made from iron themselves. Usually, they are made from weather-proof aluminum or readily-available steel. The pickets are usually hollow and resemble the solidness of iron bars. The result is more lightweight fencing that is easy to fasten together.

Sometimes, metal fencing is branded as being iron fencing when really solid steel or solid aluminum. It often has added scrolls made from machines and details that are cast like rosette shapes. This can save on cost. Custom fabricators are able to mix different manufacturing methods and materials to join cast-iron parts and details with pickets made from hollow steel. It’s also possible to make cast-iron fence panels from molds to feature some of the Victorian-era shapes. These are definitely more expensive than other types of metal fencing though.

Solid steel is simple yet durable. You can have hollow posts that are top with cast ball finials. The posts are welded to the rails along the top and bottom of the fence. You can get prefabricated fence panels like this with prices that usually start around the $15 mark. Aluminum is slightly cheaper normally with cast iron being very much more expensive!

Can you DIY with a metal fence? If you have experience with DIY, then putting in a metal fence should not be a problem. You’ll have to dig some post holes and add them to the concrete. However, if your steel is heavy or if you’re using cast iron, it’s better to get in an expert.

Compared with wooden fences, metal ones have a lot less maintenance. They can be recoated if they become scratched to prevent rust. If your chosen fence is made from rust-proof aluminum, then there’s pretty much no maintenance required at all.

They also can last for over twenty years if you protect their finish, perhaps even longer if you have a hollow steel fence. Having said that, tubular aluminum, cast-iron and solid steel can even last for a whole lifetime.